In the 2020s, Skellefteå will be a winner

In the 2020s, Skellefteå will be a winner

Everything points to Skellefteå becoming one of Sweden’s leading growth zones in the 2020s. Several business start-ups with a focus on sustainability and an increasingly strong trend in which people see the benefits of medium-sized cities are two reasons why the city’s investment climate is better than it has been in a century.

Of course, the single biggest reason is the Northvolt establishment; once it is completely expanded, the Northvolt One plant can provide about 2,500 jobs. Including suppliers and new services, the number
of jobs may grow to over 10,000 in total. To create space for growth, new housing is needed. Among the
actors investing in Skellefteå are Magnolia Bostad and Heimstaden Bostad.

“Skellefteå is full of both energy and confidence in the future. We’re very pleased that together with our partners Heimstaden Bostad and Derome, we can contribute to the municipality’s growth through new
housing with a high standard and a strong sustainability profile,” says David Andersson, Regional Manager (North) at Magnolia Bostad.

60 billion by 2030
In Skellefteå, the change is already noticeable. New residential areas are springing up throughout the municipality and one of the world’s tallest wooden buildings, the Sara Cultural Center, will be
completed in 2021.

“In Skellefteå, more money is being invested per capita than any other city in Sweden. By 2030, at least SEK 60 billion will flood into the private and public sectors. We’re also seeing major investments along the entire Norrland coast. The Västerbotten Chamber of Commerce estimates that over the next 20 years, about SEK 300 billion will be invested. We’re in a really good situation,” says Kristina Sundin Jonsson, Municipal Director of Skellefteå. 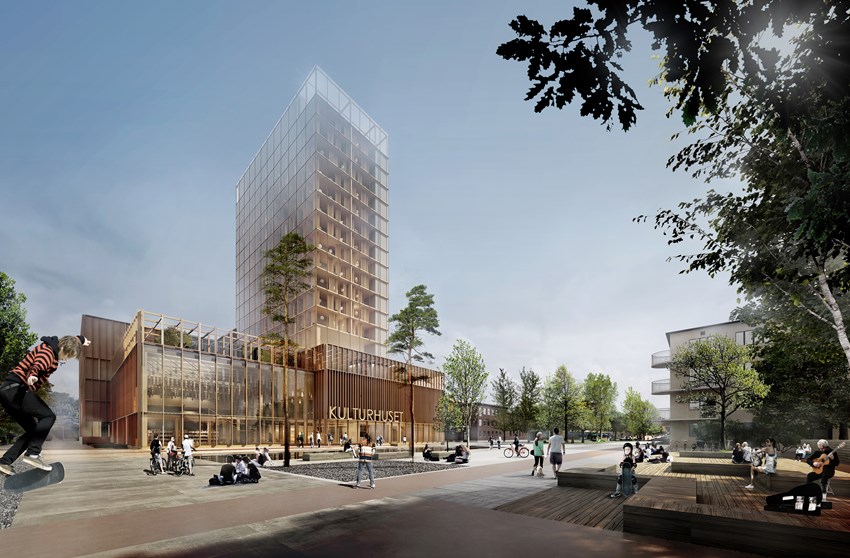 Medium-sized cities are winners
Another factor that speaks for Skellefteå is a study from the engineering and design company Afry, in which 5,500 young people participated. In the survey, only 12 per cent said they wanted to live in a city of more than one million inhabitants. Factors such as proximity to family and friends, green areas and functioning public transport were highly ranked.

“It’s partly about taking advantage of the benefits that the largest cities find difficult to offer, such as the ability to pick up your sick kid from preschool within 10 minutes of getting the call. But once a city has grown to become medium-sized, there are also opportunities to open high-class restaurants, for example, which match the behavior and standards that many people have become accustomed to in large cities,” says Thomas Sandell, Chief Architect at Afry and a man with roots in Skellefteå.

Among Skellefteå’s recent transplants is Frida Viksten, who moved here after graduating from Uppsala University and now works at WSP.

“When I talk to people I know from Uppsala, I do at least as much fun work and have more responsibility. I think that’s a plus for many young people; there are development opportunities in a place like Skellefteå and everything isn’t finished already,” says Frida Viksten.

Facts
Skellefteå Municipality currently has 72,904 inhabitants. The official target is to reach 80,000 inhabitants by 2030, but this may be significantly revised upwards. To make room for the expected population growth, there are currently plans for at least 5,000 new homes in central locations and about 3,000 additional homes in outlying areas.

Facts
Skellefteå Municipality currently has 72,904 inhabitants. The official target is to reach 80,000 inhabitants by 2030, but this may be significantly revised upwards. To make room for the expected population growth, there are currently plans for at least 5,000 new homes in central locations and about 3,000 additional homes in outlying areas.